An upcoming series of posts will be providing a “glimpse” of the National Parks in the United States including Yellowstone, Grand Tetons, Badlands, Redwood Forests, Yosemite, Death Valley, Grand Canyon and others. This series is intended to provide a glimpse into the uniqueness of each national park encompassing the beauty of its topography, its geological make-up, and the distinct ecosystems supporting a diversity of wildlife and plant species.

Yellowstone is situated in the northwest corner of Wyoming and includes small areas of Montana and Idaho. It encompasses 2.2 million acres (or 3,400 square miles). It is an area larger than the states of Delaware and Rhode Island combined.

Yellowstone is one giant volcano resting on top of one of the largest magna chambers in the world. The last major eruption was 600,000 years ago. From 1,000 to 3,000 earthquakes occur each year at Yellowstone, but most are too small to be felt.

Sixty percent of the world’s geysers are situated in Yellowstone with over 200 active geysers. Geysers are hot springs that are constricted at the surface that periodically erupt into a fountain of boiling water and steam.

The ‘Old Faithful’ geyser is probably the most famous geyser in the world, not because it is the tallest geyser, but rather it is one of the more predictable geysers. ‘Old Faithful’ erupts several times each day and its eruption is predictable within 30 minutes prior to erupting. Eruptions may occur as frequently as every 60 to 90 minutes. Each eruption blasts 3,400 to 8,400 gallons (14,000 liters to 32,000 liters) of boiling water to a height of 120 feet (36 meters).

The reason “Old Faithful” is quite the predictable geyser is because it does not share its underground plumbing system with other geysers. Most of the water from geysers first arrives from rain or snow melt. The water seeps deep into the earth and begins a long recycling journey back up again. The journey can take 500 years or more before it is recycled and blasts into an eruption. In other words, the hot water erupting that this image captured was last seen during the time of Columbus.

Grand geyser is consistently the tallest and perhaps the most spectacular of the predictable geysers. Grand geyser will erupt around every 8 to 12 hours and will blast to a height of 150 to 180 feet (46 to 55 meters).

Petrified trees border the Grand geyser pool area. There are two types of geysers, that is, either cone-shaped like the Old Faithful geyser or fountain-type geyser. The “Grand” geyser erupts from a pool of water to produce a fountain-type geyser. After the eruption has ended, the water will be out of sight or sometimes a pool of water will be visible.

Castle geyser is considered a very old geyser that is 5,000 to 15,000 years that has a 12-foot (4-meter) cone. Castle geyser erupts at an interval between 9 to 11 hours. Bison are often seen grazing near the geysers. 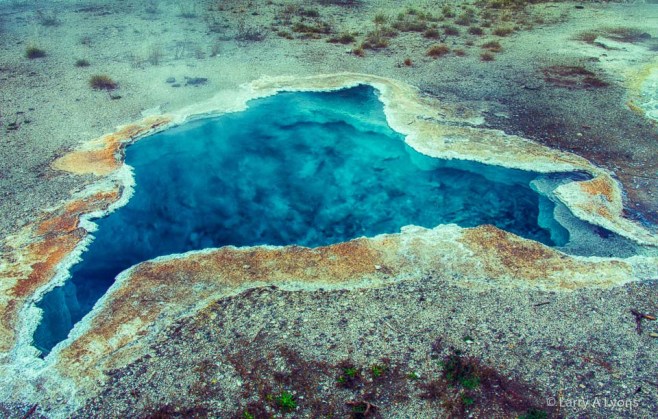 Hot springs are the most common geothermal feature in which rising hot water is released as a runoff or as steam. Water temperatures can exceed 190 degrees F (90 degrees C). Unlike geysers with a pressurized plumbing system that erupts through a small constriction, hot springs have wide openings where super heated water is continuously circulating to the surface.

Colorful microbial mats, composed of trillions of pigmented bacteria, live in and around the hot springs. The colors can range across a wide spectrum of colors.

The bright colors found in Yellowstone’s hydrothermal basins originate from thermophiles – microorganisms that thrive in hot temperatures and the mineral-rich water.

Large Hydrothermal basins, like the ‘Grand Prismatic Spring’, also reveals extensive microbial mats with the vivid colors that flourish throughout the basin.

In addition to all of the geothermal features that Yellowstone has to offer, there are many other spectacular vistas including snow covered mountains and a golden grand canyon. 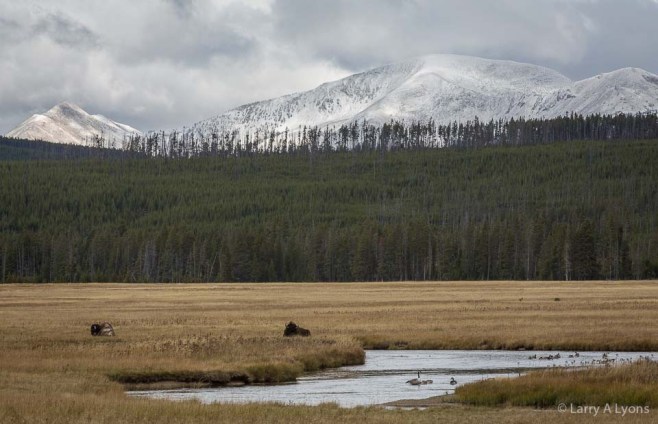 Here a couple of bison are resting in the grassy plateau while waterfowl wade in the pond. Yellowstone is home to 50 species of mammals and 300 species of birds. An upcoming post will provide a glimpse into the wildlife of Yellowstone. 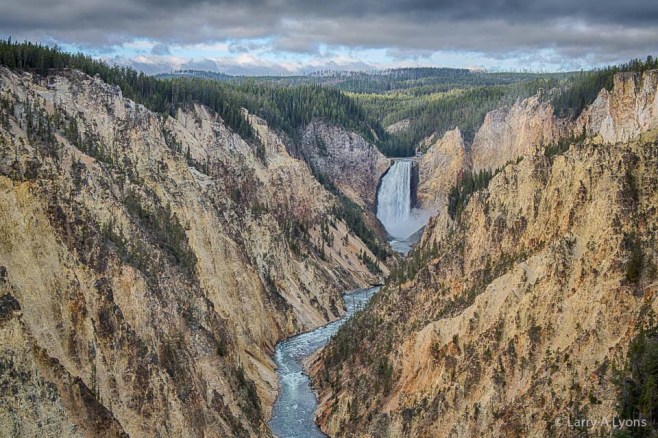 This golden canyon was formed from volcanic rock about 600,000 years ago. The golden color of the volcanic rock evolved from the iron in the rock that had become ozidized from steam and hot water.

Yellowstone River is recognized as the longest free-flowing (undammed) river in the United States. 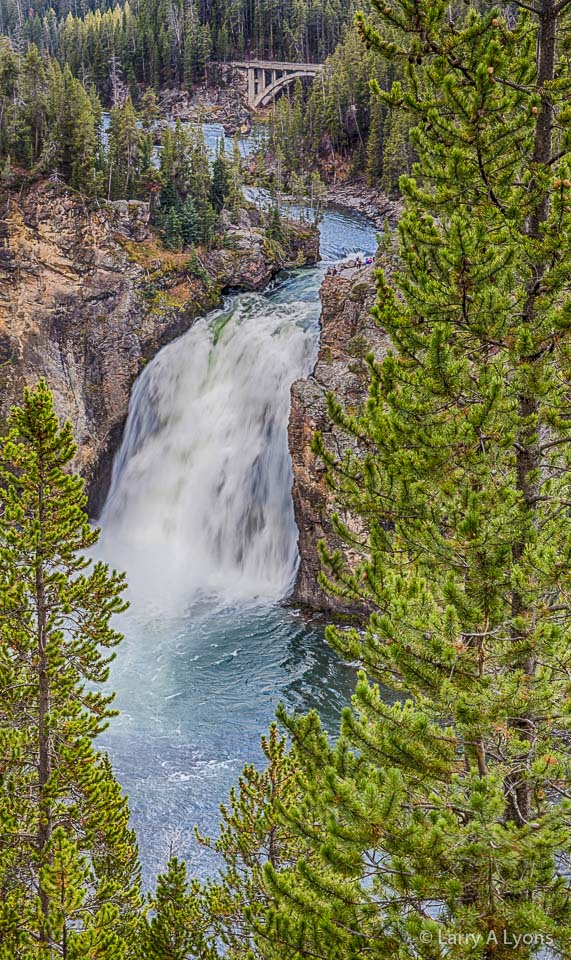 Forest fires are an important part of Yellowstone’s ecosystem and has become to be understood that fires are a natural regeneration process. Yellowstone, like other parks, have instituted a natural fire management plan that allows fires caused by lightning to burn out on their own. For instance in 2013 there were 15 fires. Of the 15, eleven of the fires were only 0.1 to 1.0 acres in size. The remaining four fires ranged in size from 189 acres to 7,200 acres for a total of 11, 933 acres. Five of the 2013 fires were attributed to human activity while the remaining ten fires were caused by lighting. In 2014, there were only five fires reported and each of those fires was only 0.1 acres in size.

Many of Yellowstone’s plant species are fire-adapted. For instance, lodgepole pines (Pinus contorta), which make up nearly 80% of the park’s extensive forests, have cones that are sealed by resin until the intense heat of fire cracks open and releases the seeds inside. 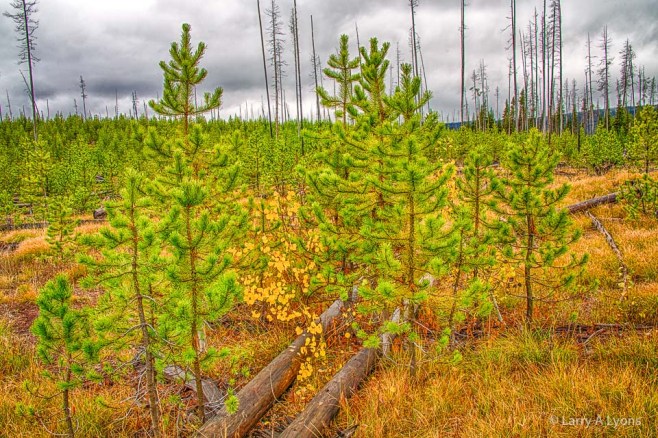 One lonely Aspen sapling along with the pine saplings are in the process of regenerating into a new forest. Fires may stimulate regeneration of aspen, sagebrush, and willows, but the interactions between these plants and fire is complicated by other influences such as grazing levels and climate.

The scenery of Yellowstone at night can be as grand as the daytime hours.

‘Venting To The Stars’ © Larry A Lyons

Here a full moon is shining through Old Faithful’s eruption.

Bid adieu to Yellowstone for now. What a magnificent treasure! Stay tuned for upcoming posts. Two more posts on Yellowstone will be forthcoming. One is a glimpse of Mammoth Springs, which consists of extensive limestone formations generated by the hot springs of Yellowstone, and the wildlife of Yellowstone. In addition, a ‘glimpse’ into other National Parks, including Grand Tetons, Badlands, Redwood Forests, Yosemite, Death Valley, and Grand Canyon, will be forthcoming.

20 Responses to “Yellowstone – The Landscape”