This is the final post of a three part series of a Florida field trip that this photographer co-coordinated for the South Jersey Camera Club members for the purpose of photographing birds and their behavior. The field trip was conducted over a five-day period in the beginning of March. The first post entitled, ‘Spring Has Sprung: Busy, Busy Birds’, visited the Venice Rookery with an amazing diversity of birds courting, mating and raising offspring. The second post entitled, ‘Spring Has Sprung: Birds of Prey’, traveled to various locations in southwest Florida to photograph birds of prey nesting and caring for their offspring. This post provides a melange of birds captured when visiting the Ding Darling Wildlife Refuge and the Corkscrew Swamp Sanctuary.

Here is just a sampling of birds photographed at Ding Darling starting with the ‘Reddish Egret’. The ‘Reddish Egret’ is considered the least common heron in Florida. The population of this heron was almost eradicated due to plume hunting during the 19th century. The species has never fully recovered with the current population in the United States of only about 2,000 pairs primarily residing in southern Florida, along the Gulf of Mexico, and Texas. 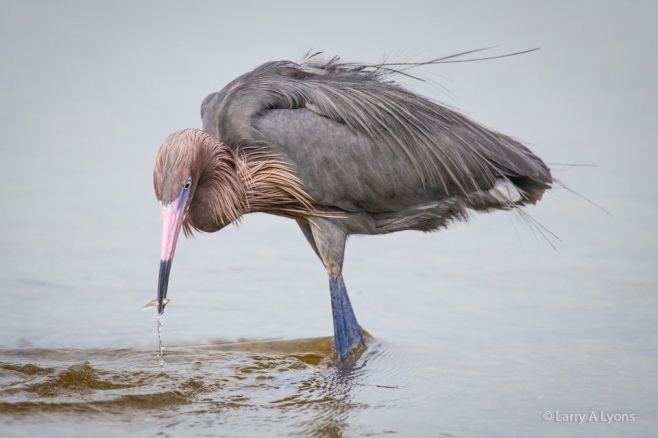 The feeding behavior of the ‘Reddish Egret’ is captivating to watch. It leaps sideways and quickly changes directions in shallow waters searching for small schools of fish to feed upon.

‘Reddish Egret- Down the Hatch’ © Larry A Lyons

White Pelicans only spend part of their year in Florida. They migrate to their wintering grounds to coastal areas of Florida, Gulf of Mexico and southern California. In March and April they migrate to inland lakes in flocks to their breeding grounds as far north as Utah, Idaho, Minnesota and Canada.

The ‘White Pelican’ is considered one of the largest birds in the United States with a 9-foot (2.7 meter) wingspan.

‘Landing Gear Down’ © Larry A Lyons

This pelican was rigorously fluffing its wings and having a bath. 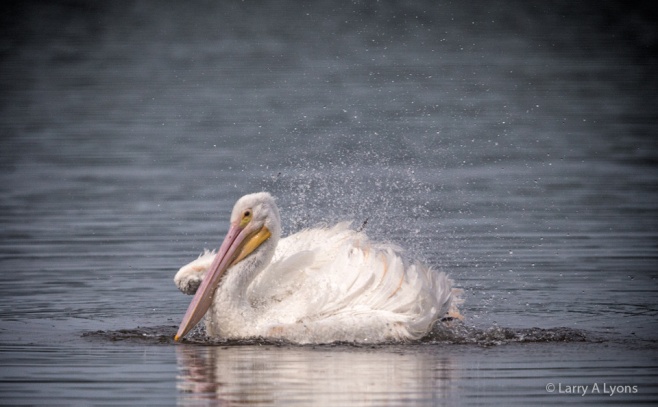 ‘Blue-winged Teal’ are long distance migrants with their territory throughout the United States, Canada, Mexico and northern South America. The can be found wintering in Florida and will migrate northward in the spring to breeding grounds.

This ‘Tricolored Heron’ is standing absolutely still, not necessarily to get photographed, but waiting for prey to approach it. Its’ prey consist of small fish, crustaceans, and aquatic insects. It is a remarkably slender bird with long beak, neck and legs. 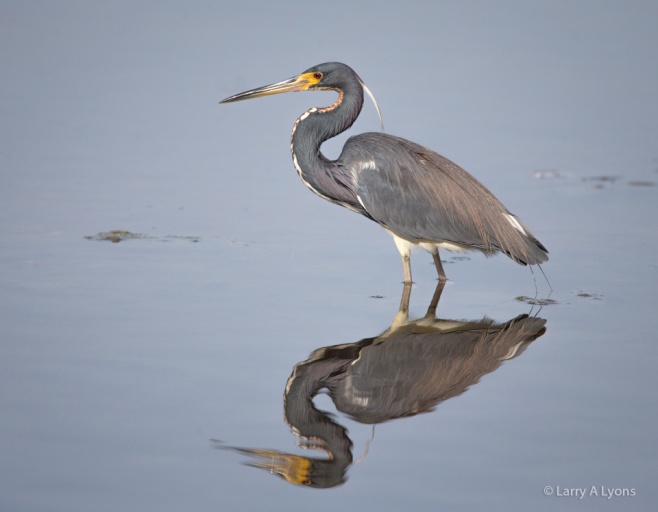 The ‘Tricolored Heron’ is common along the coastal habitats of the Southeastern United States.

The ‘White Ibis’ is a wading bird residing in the deep South. It is one of the most numerous wading birds in Florida although the population has been declining in recent decades due to the loss of feeding and nesting habitats.

The ‘Little Blue Heron’ is another bird that resides mostly in the deep southern United States and Mexico. It looks much like a Snowy Egret when it is young, but molts to the dark slate-blue plumage as an adult.

This ‘Juvenile Yellow-Crowned Night Heron’ was stalking prey along the bank. These birds are often active at night. It is interesting that this species shows up several times in fossil records with the earliest fossil record being 2 to 2.5 million years old from Sarasota, Florida. 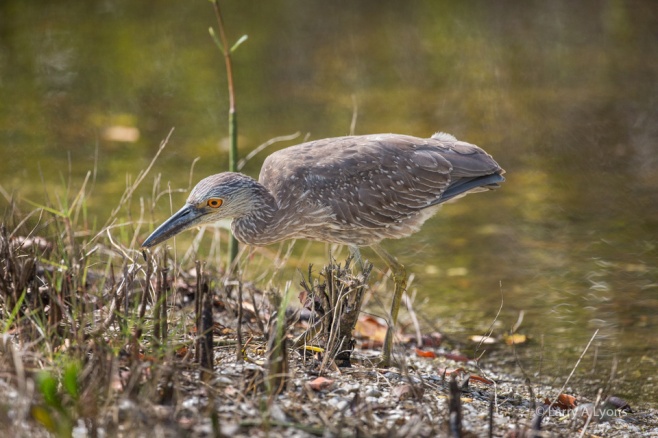 The ‘Wood Stork’ is considered one of Florida’s ‘signature’ wading birds. It is classified as ‘threatened’ by the State of Florida and federal government due to the destruction and degradation of the wetlands. 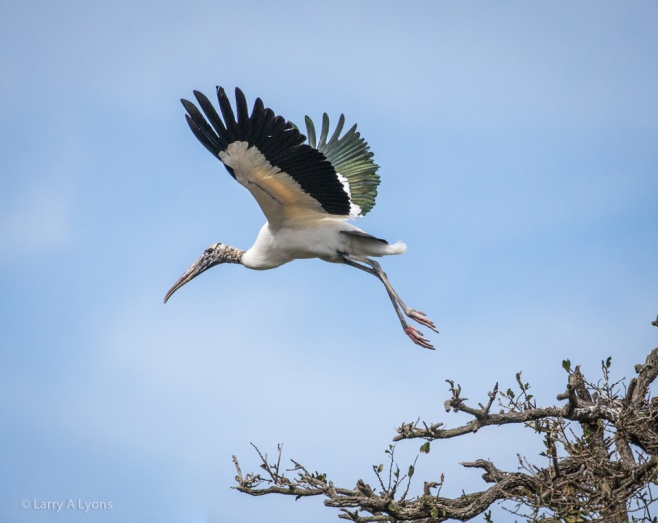 This alligator is a resident of the Ding Darling Refuge. Here this gator was basking in the sun to control its body heat. Adult gators enjoy a diet of fish, snakes, turtles, small mammals, and birds.

Perhaps we should let this gator know which birds are protected. And perhaps this gator provides some protection benefits for the birds from predatory mammals.

The Corkscrew Swamp Sanctuary is a very tranquil sanctuary with an extensive boardwalk to transverse though this wetland. It is not to be missed. This sanctuary is part of the Western Everglades in Southwest Florida. It consists of approximately 13,000 acres and is primarily composed of wetlands and includes the largest remaining virgin bald cypress forest in the world. The National Audubon Society has been ultimately responsible for acquiring, protecting and maintaining this sanctuary.

Not only is the sanctuary important for a variety of endangered or federal or state listed birds including the Wood Storks, White Ibis, Roseate Spoonbill, Tricolored Heron, but also for protecting a variety of other species including the Florida panther, American Alligator, and Florida Black Bear. Several rare plants are also found at this sanctuary including the Ghost Orchid.

‘Anhinguas’ primary habitats are cypress swamps, rivers and wooded ponds. This pair of ‘Anhingua’ was attending to their nest.

There were a number of songbirds to view including some very common ones. The lighting on these birds is a photographer’s dream. 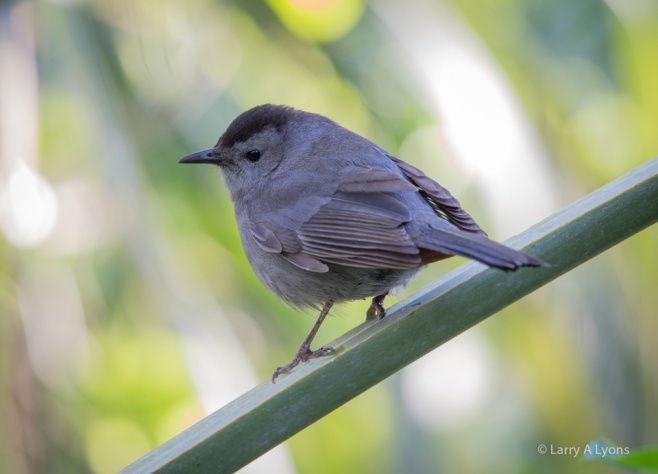 Florida is a very seductive place to visit for a number of reasons and that would include another seductive sunset at a beach in Naples. So, here we are being seduced again, as the brown pelicans roost for the evening.

‘Another Seductive Sunset’ © Larry A Lyons